in collaboration with Alison Saar 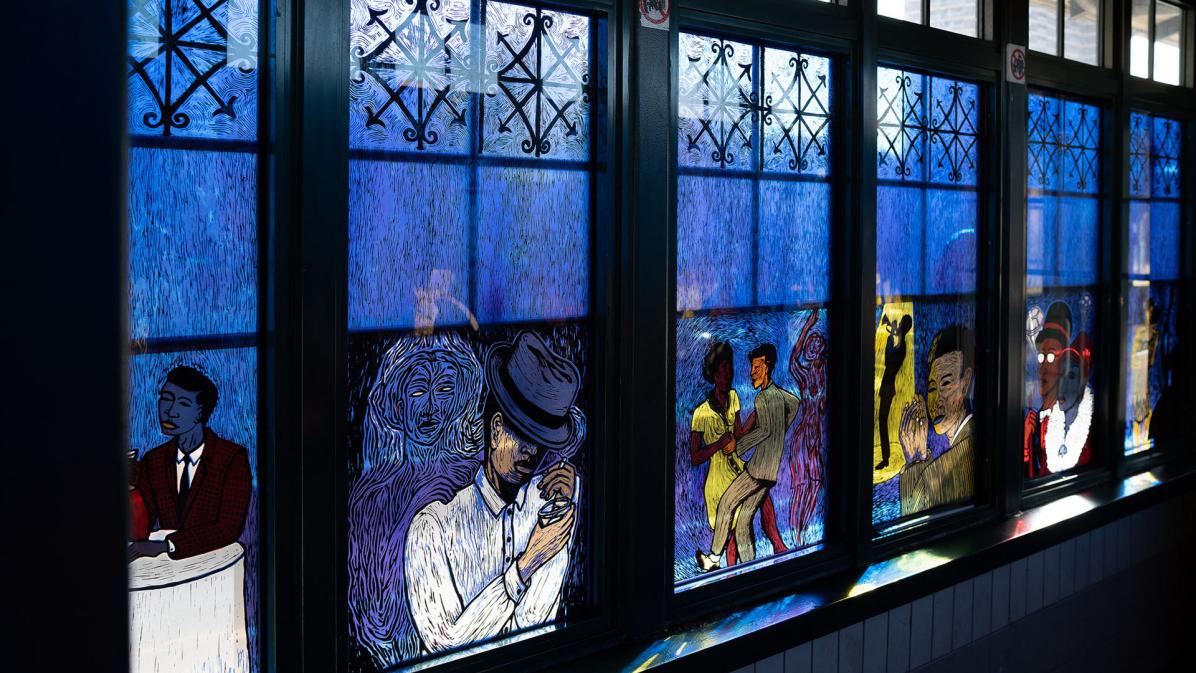 Technique: Laminated glass and bronze grilles and reliefs on platforms

DESCRIPTION: Alison Saar created Hear the Lone Whistle Moan in 1991, a series of bronze relief sculptures on the northbound and southbound platforms of the station. The title, Hear the Lone Whistle Moan, refers to a spiritual that uses the train as a metaphor for the passage to heaven. Trains have often been associated by African Americans with escape, and the Underground Railroad in particular. In Saar’s words, “these pieces...create a simple narrative of two people. One, the young woman coming to the city in hopes of advancing her career, the other, a successful businessman leaving the city to return to his hometown. I believe these two scenarios to be examples of how many Americans have used the railroads to and from New York throughout history. Yet I was also addressing the specific and rich tradition of the role of the railroad in general in the lives of African Americans.” A third figurative sculpture of a train conductor is located at the top of the platform stairs.

In 2018, as part of station improvement, Alison Saar expanded her original project and created copacetic, a panoramic scene of imagined dancers, singers, musicians and patrons enjoying Harlem’s heyday of the 1930s and 40s. copacetic comprises 24 laminated glass panels installed throughout the four glass shelters along the platforms. The upper windows are inspired by the Harlem-125 Street Station’s wrought iron work and designs from the African diaspora. The glass artwork was created from the artist’s original woodcut prints, which as she explains, “gives a nod to the work of the many great African American artists of the Harlem Renaissance that have used the same medium [woodcut prints] in their practice, such as Elizabeth Catlett, Hale Woodruff and Aaron Douglas. Saar’s palette of deep reds, blues and yellows introduces a vibrant graphic quality to the platform’s shelters, illuminated by the rising and setting sun over Harlem. Alison Saar’s projects at the Harlem-125 Street Stationencourage preservation of Harlem’s great legacy and celebrate its rich history.

We use cookies to optimize our website and to provide you with the best possible online experience. By clicking on "Allow all" you agree to this. For further information and the possibility of allowing or disabling individual cookies, please visit our Privacy Policy.